"Intra-actions are practices of making a difference,
of cutting together-apart,
entangling-differentiating (one move)
in the making of phenomena.
Phenomena—entanglements of matter/ing
across spacetimes—
are not in the world, but of the world."
Karen Barad

In her research Laura Viale has focused on the landscape and its natural elements—blades of grass, leaves, inflorescences, branches, rocks—by way of photography, video, drawing, and sculpture, revealing a propensity for the detail that is the result of a cognitive need requiring proximity. The exceptions are few and far between, one of them being the video and the series of photographs entitled Alla fine del mondo (At the end of the world), taken in 2002 during the artist's residence in California. The far-away West, which for us Europeans was for so long a veritable finis terrae, no doubt contributed to radicalizing the artist's interest in the concept of the threshold that, with all its semantic capacity, still today plays an important role in her research. That cycle of images contains both the close-up, illuminated by colored lights that translate the common corner of a hedge cloaked in shadow into a psychedelic mirage, and the horizon captured at dusk, when the light is chased by the darkness, and the two conditions coexist and at the same time exclude one another.
Starting from that work, in order to arrive at the new ones shown at Ghost Space, Laura has driven her research to the zero degree of visuality, in the relationship between light and shadow that in photography corresponds to the operative pre-condition of the technical means. In the works on display, the light does not project colors on the epidermis of things, but rather limits itself to revealing them: by using a LED flashlight and long exposure times, surfacing from the abysmal black of the darkness are natural elements whose presence is of variable intensity, the result of the overlapping in transparency of different shots taken of the same place. This layering of times within a given space seems to trace over the condition of the act of contemplation, which the artist identifies with the practice of photography itself: the chance to exercise the gaze, to "see beyond" starting from a space where the eye can wander, which in ancient times was the space of the sky (templum). The images that are the result of this process have the consistency of apparitions, traces that refer to the nature of the photographic medium and to the fact that it is an absolute dive into the material of time. The use of a flashlight emphasizes, moreover, the very function of the lens, which is that of "framing" and then separating portions of reality from the continuous flow of what exists. The physicist and feminist theorist Karen Barad speaks specifically of the 'cut' in order to define every act of observation, according to a vision of the world where everything is profoundly connected and 'entangled', and in which it is necessary to identify, temporarily separate what would not be so in order to get to know it. Many things about Laura Viale's research can be related to this horizon of thinking and in general to the reflections expressed by the new philosophical materialisms, which have called into question the binary logic of Western thought and its traditional subject-object, organic-inorganic, natural-artificial dichotomies.
In the works on display, the allusion to a spatio-temporal multidimensionality, to a space-time from which it is possible to come and go, is announced by the artist in the title itself: Wild Carrots Bloom Over There, the indication of an elswhere to which quantum physics has assigned a fully legitimate status and that in these works takes shape in a process at once operative and conceptual of stratification, which goes so far as to cause the physical substance of the image to literally emerge from the frame. If the overlapping of layers in the photographic prints leads back to the strata of different and partially transparent images, in sculpture it leads back to the levels of the digital processing of the photographs. With Temporary Branches, a transparent PVC sculpture, Laura shapes the electronic landscape on which the better part of our everyday visual experience as concerns reality is based. Starting from a photograph taken in the woods, she then translates the image into a vectorial drawing, choosing to preserve those "temporary branches" produced during the processes of elaboration implemented by the software, those layers destined to be eliminated in favor of the final results, and in which the digital program reveals its very nature: the smooth flow of the vegetation is translated into fragmented lines, into sequences of lines and small squares. Of those branches, whose "growth" is potentially never-ending, the artist reproduces some elements in PVC that is cut by water jets. Exposed to the light, which crosses them and is reverberated in the flexible material, the temporary branches seem to encompass the immanent vitality of prehistorical creatures that advance hesitatingly, amidst leaps forward and pauses, to the rhythm of their breathing. 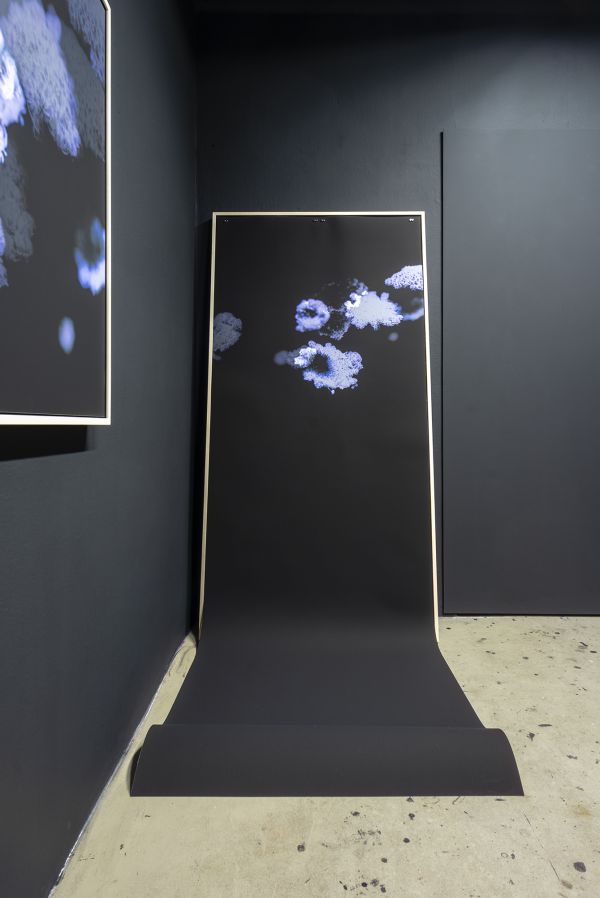 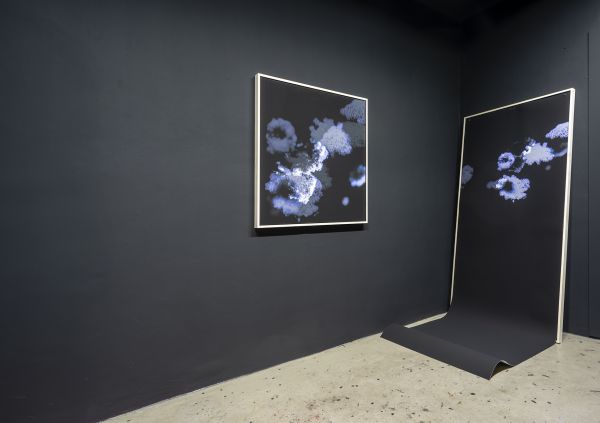 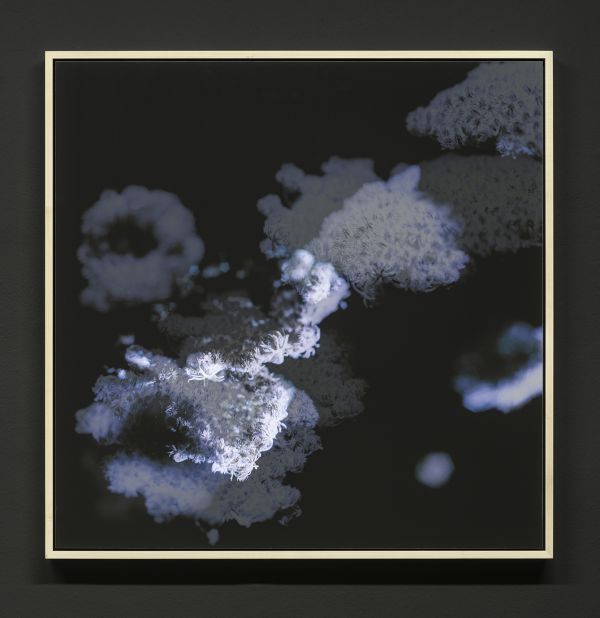 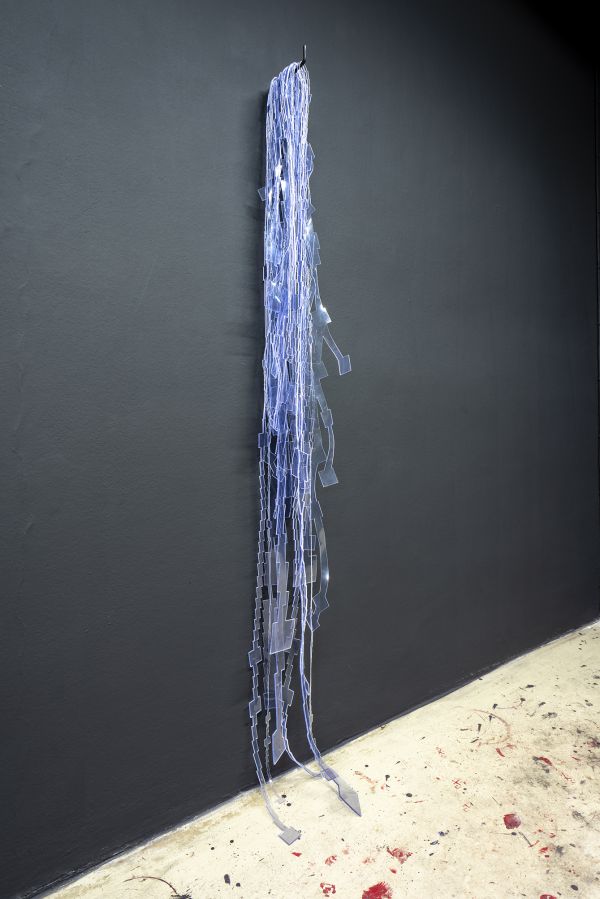 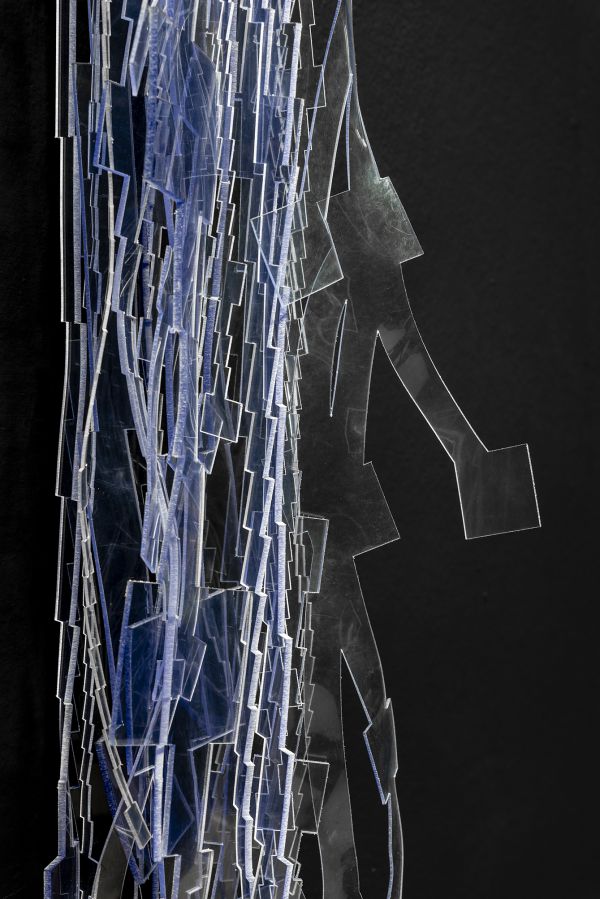